You go girl! The experiences of women in STEM

What can we do to empower girls in secondary school to opt for a STEM focus in their education and career? In a world where scientific and technological solutions are desperately needed, we cannot exclude half the world’s talents. We need girls and women! Our T3 teacher network understands the importance of motivating girls to pursue STEM. Four T3 instructors and two students from Europe share their experiences with gender issues, classroom methods and STEM education.

Do boys and girls do equally well in STEM?

“In my physics class the ratio of boys to girls is usually 50:50,” says Dutch physics teacher Cathy Baars. “They perform equally well, so there is no reason for girls not to choose STEM.” Physics and chemistry teacher Fernanda Neri also sees a balanced ratio of boys and girls in her school in Portugal. “We don’t notice a difference in how they perform, in terms of grades. I do notice that girls and women sometimes seem less eager to take risks. Most of the teachers are female. But when we have a T3 training course introducing new technology, they do sometimes leave it up to the men to work with it ‘because they are better at it’. But by doing this, female teachers cannot pass on the knowledge to their students.” 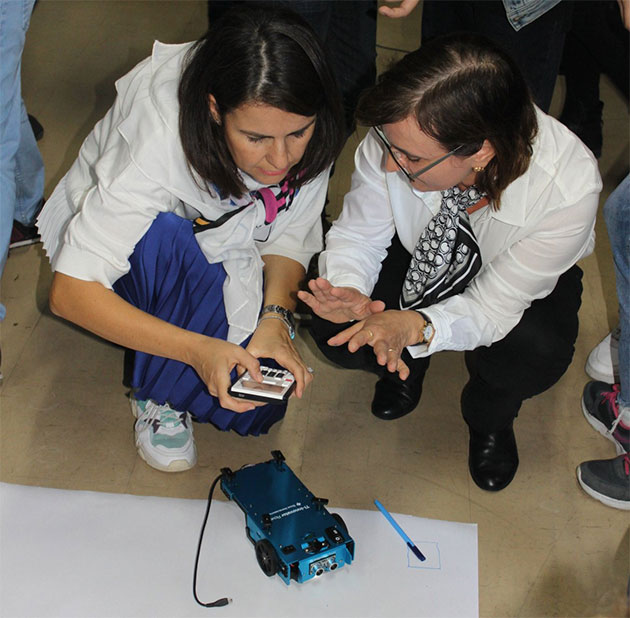 Fernanda Neri (right) in the Erasmus project meeting - the power of maths.

To help girls succeed in STEM, the German government, for example, has instigated a special Girls Day. “In 2019 three of our students were allowed to show Chancellor Angela Merkel that girls are just as good as boys,” says Mirco Tewes, a teacher at the Primo Levi Gymnasium. “They centred their demonstration around the topic ‘what do you mean girls can’t park?’ To prove their point, they programmed a robot vehicle with parking assistance using TI technology to show how autonomous parking can work. The experience might, in fact, have impacted on the girls' career choices. One of them decided to study biomedical engineering, one student took a gap year and the third girl studies mathematics in Berlin.’’ 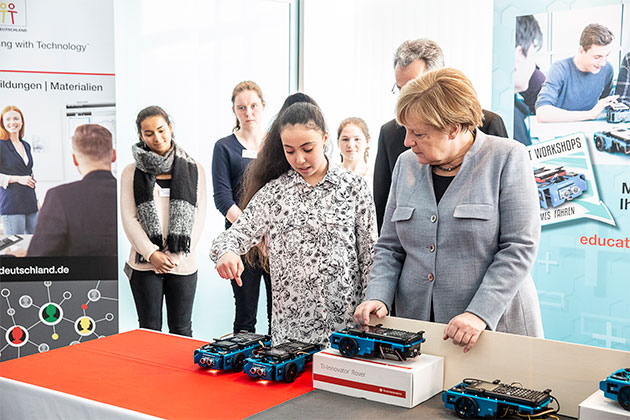 Were girls treated differently when you were at school?

Portuguese student Ana (25) who is working on a PhD in quantum computing never felt herself that she was being treated differently in secondary school because she was a girl. “However, from a young age I remember hearing that girls preferred chemistry and boys preferred physics. How this developed I don’t know. Maybe there is indeed a difference in the ways our brains work, or this was an initial pattern in the choices, and then it got perpetuated by cultural and social influences. But this was something that has followed me since I was little, in jokes and day-to-day conversations.” 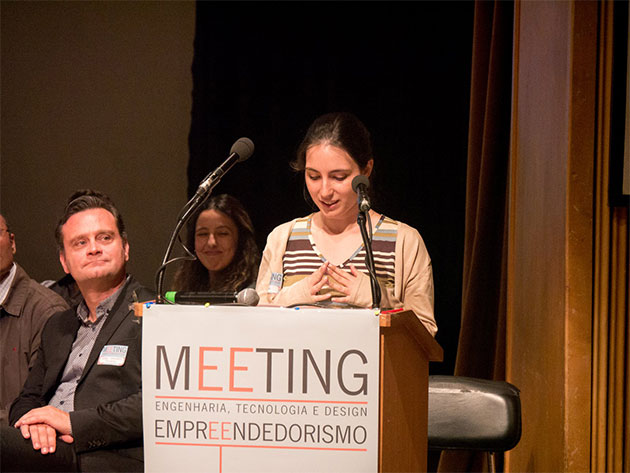 PhD student Ana shares her experiences as a master in physical engineering in a research career.

Dutch medical student Eva (24) has a similar experience. “The mix of boys and girls doing technical studies was pretty balanced, but the vibe was that girls would choose a cultural profile. Also, it was readily accepted when girls would choose maths courses that were considered to be ‘easier’.  This meant that several of them ended up taking extra maths exams during the summer so they would qualify for admittance to a university of technology." T3 instructor Cathy Baars thinks teachers should be alert to the risk of making assumptions as well. “For example, if a boy scores six out of 10, he may be allowed to carry on with physics, but if a girl does, there could be doubts about her abilities,” she says.

The Dutch teacher had a positive secondary school experience when she was a teenager but this, she says was “probably because I was very curious about science and I excelled.” Thérèse Froehlich, an ICT teacher at the European school of Strasbourg, had a different experience. She ended up challenging the advice she got – which was not to proceed with STEM. “My class teacher in my first year of secondary school told me that I did not have the profile of a science student,” she says. “She suggested I focus on literature instead. I did not give up and left school with a BAC C, a baccalauréat in math, physics and chemistry.”

What motivates girls to go for STEM?

“The exercises and problems are like a game for me, I like finding the solutions,” says Portuguese PhD student Ana, who always knew she wanted to study STEM. “I like to reason and not to memorize, so it was a natural choice for me.” Her mother, science teacher Fernanda Neri, says it was her ‘brilliant’ physics and chemistry teacher in 8th grade who made her love the subject. I enjoyed the fact that physics and chemistry can explain the world that we live in,” Fernanda says. “Then in 10th grade I had the worst teacher ever, but that was an incentive for me. It made me see that a teacher can ruin a subject that I love to study - and this motivated me to become a teacher who inspires students. As a woman, I am an example for my student girls. So, when they see me doing experiments, coding, working with electricity and being confident about it, I hope they realise this is not only for boys or men. I also like to show girls that there is no problem in failing.”

Leading by example seems to be of great influence. Dutch student Eva says she was inspired by her physics teacher who was very enthusiastic. “She stood out among all the stuffy men. When she taught us about epidemiology and how diseases originate, she got me really interested. She motivated me to choose medicine, and, in that sense, she opened new doors for me. In hindsight I chose certain subjects because I liked the teachers who taught them,” she says. “It’s a shame, because in chemistry we had an uninspiring teacher and I found out at university how much I like that subject.”

Cathy Baars has also realised that she is a role model and that this helps girls to go for STEM. “During a project where students learned to programme the robotic vehicle TI-Innovator Rover, one of the girls enjoyed it so much that she decided she wanted learn more. She chose to go to technical college to specialise in computerised banking. ‘You have shaped my career,’ she told me later.” 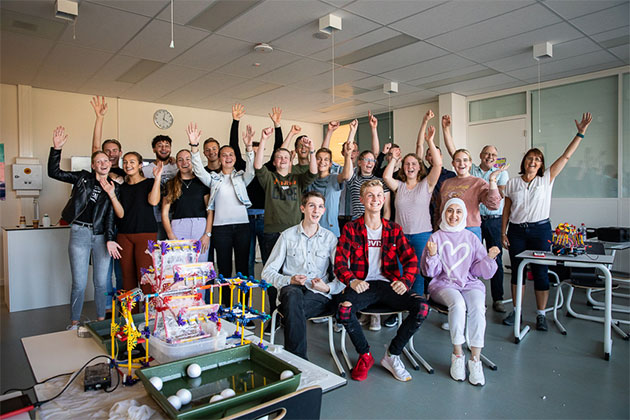 Physics teacher Cathy Baars (right) with one of her classes

During her master’s in electrical engineering and automation, French teacher Thérèse Froehlich was inspired by the teaching methods used by her electronics lecturer. “She was talking about electronic components like they were little living things. Electronic montages became rounds of children who together produced physical phenomena. She managed to pique my interest in electronics by introducing me to another mode of instruction.”

What can teachers do to help girls to succeed in STEM?

Thérèse Froehlich has adopted the same type of approach that her electronics research teacher applied. “And I introduced a lot more lab experiments to get girls involved,” she says. Fernanda Neri deliberately pushes girls to be in the front line and encourages them to do hands-on experiments. “I had noticed that when students could choose from several tasks only the boys went for an activity that involves programming,” she says. “So, the second time I did the project I urged girls to participate in coding and experimenting. Even then some girls just watched, instead of actively participating. They seemed to be afraid of messing up or making errors. But I am aware of this, so I encourage girls to move out of their comfort zone and show them what they are capable of.” 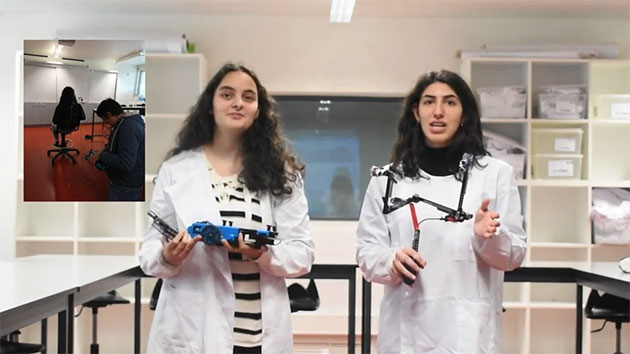 Cathy Baars has noticed that girls sometimes share quite specific interests, like knowledge of the human body. “We occasionally work with the flipped classroom method where students decide on the task they will work on,” she says. “This motivates girls to pick out subjects which interest them. Girls also really enjoyed an introduction project to coding that focused on creating art in Python. In subsequent projects, this resulted in a situation where the girls took on most of the programming. Another suitable practice is the scrum method where students create groups based on the talents and skills of the participants. This automatically results in a good balance between boys and girls. The method empowers both boys and girls and they both experience their specific skills contributing to the functioning of the entire group.”

Why should girls choose for a STEM education and career?

Every girl who wants to study STEM should go for it, says Cathy Baars. “As a teacher I approach my students in a fully gender-neutral way. For me teaching is all about showing students the beauty of physics.” Student Eva thinks girls should be free in their options and choice, although she doubts the tactic of overstimulating girls to choose STEM. “Every student should choose the education and profession that matches their talents,” she says. Ana agrees and is happy with her choice. “Quantum computing is a lot of fun because it is a very new research topic. I do think we need to change the view that women have more difficulties than men in certain areas so the new generation of students will not be influenced by this. STEM careers are very good careers, interesting and with potential. Women should not hold back out of insecurity or fear. If they like STEM topics, they should pursue them. We can achieve everything we want to when we work hard.” 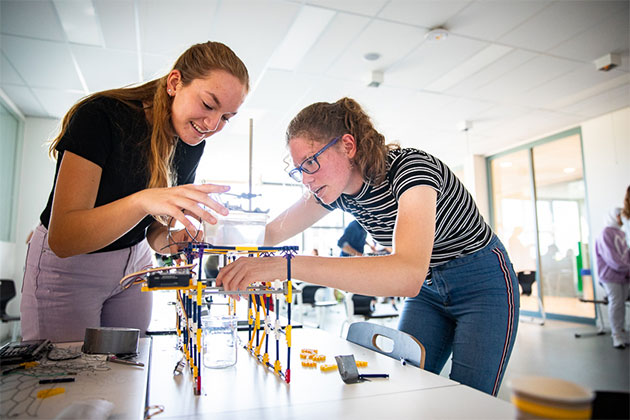